Cyanobacteria, why are they toxic ?

Cyanobacteria, also known as ‘blue-green algae’, are photosynthetic microorganisms living in freshwater and seawater, at the surface and below (phytoplankton), and some of them also at the benthic interface. In rivers and lakes, they usually multiply and bloom when the water is warm, stagnant, and rich in nutrients; forming mats or scums, and giving rise to spectacular coloration events (in general blue/green but can vary from red to brown). We speak about ‘Harmful Algal Blooms’ (HABs) when cyanobacteria induce oxygen depletion (eutrophication) and/or release compounds altering smell/taste of the water (e.g. geosmin), or being toxic to wildlife, cattle, pets and humans (cyanotoxins).

Essential node of the trophic network, with nitrogen-fixing capacity or involved in symbiosis for certain species, cyanobacteria have many key-roles in the ecosystem functioning. Phylogenetically, 2,700 species belonging to 390 genera have been identified by today. We estimate than they can produce a panel of >2,000 bioactive secondary metabolites, including many compounds which have a potential use in cosmetics or medicine, and as previously mentioned, diverse toxins.

Within blooms, 50-90% of cyanobacteria cells can produce such toxins causing a variety of effects through direct contact, aerosol inhalation or water ingestion: skin and mucous irritations, allergy, asthma, intestinal troubles, muscle pains, and more severe impairments of the liver and the nervous system.
Poisoning of livestock and pets having drunk water at contaminated sites are frequently reported whereas human cases are often minimized because they do not cause death or because it is more difficult to establish scientific proofs linking health effects with cyanobacteria exposure. However certain toxins are highly potent poisons that represent a serious threat to children or people with respiratory, liver or kidney deficiencies, in case of repeated exposure.

The following table presents the major toxins and their biologic toxicity.
. 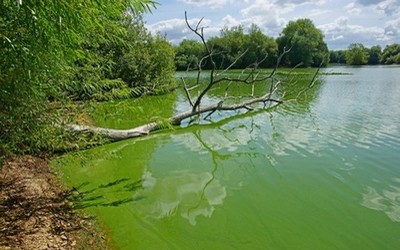 The past decades have witnessed increasing number of ecosystems clogging and poisoning cases resulting from cyanobacteria blooms. The impact of human activities on this phenomenon which is likely to aggravate in the future is no longer questioned by the scientific community: a higher frequency of heatwave events, ecosystem imbalances due to the supply of nutrients from the land (fertilizer runoff or septic tank overflows), and loss of biodiversity all favor growth of cyanobacteria at the expense of the rest of the biotope.

Some cyanotoxins can be produced by different species while some other are apparently associated to one single species. Different strains from a same genus or species can also have a toxigenic activity more or less important depending on their geographical localization or seasonal environmental parameters, even on a daily scale under the influence of water stratification or wind effect.

It is also important to notice that certain toxins are excreted, either released out of the cells or remaining cell-bounded, but most of toxins produced by cyanobacteria are indeed endotoxins that are liberated only when cells die and explode, thus when blooms collapse and decline.

Water resources being central in our societies, the occurrence of cyanobacteria blooms is of major concern in a global context of environmental risk assessment, first because it is an indicator of a source of pollution, and second because of the toxicity issue. In many countries, water management and public health authorities have been taking that seriously and developed ambitious programs to improve detection methods, to provide strict regulations and/or guidelines based on tolerance thresholds securing freshwater-related activities, and to test remediation strategies.

Regarding toxicity, thresholds have been usually established based on estimation of toxin-producer cell densities, or by measuring toxin concentration in water. In the majority of recreative areas open to the public during the summer period, these methodologies are employed in routine and applied accordingly leading to extended closures of sites, sometimes on the whole season.

Reacting to these situations in a more accurate and proactive manner, providing transparent information towards the public, would be obviously beneficial for the economic activities at these sites. Performant and robust scientific tools supporting decision-making are crucial to reach this objective.